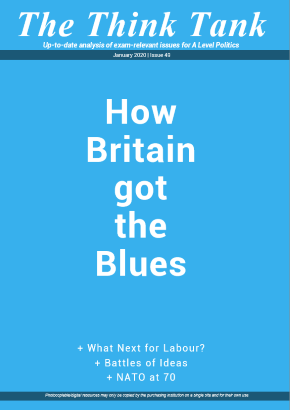 Let’s Get Brexit Done – Boris’s message seems to have been the victorious one in the General Election as the Conservative Party won its strongest majority since the days of Thatcher. In this issue’s opening article we look at the result in detail.

The President and War – The killing of Qasem Soleimani has been called an ‘act of war’ by Iran, and has called into question how far the US President is actually able to take military action.

The future of Northern Ireland? – The Stormont Assembly has been in a state of paralysis for approaching three years. With talks of restoring it, and with the implications for Northern Ireland of Boris’s Brexit deal, we investigate what will happen next here.

Party and Ideology? – The 2019 General Election seemingly saw the Labour and Conservative parties go more left-wing and right-wing respectively. In the ‘Battle of Ideas’ find out whether this election saw these parties return to their ideological roots.

Unique among politics magazines, The Think Tank is written primarily by practising teachers, and is entirely specification-focused. In it we aim to draw out the exam-relevant issues of events, and make them accessible to students through discussion and exam-style questions.

Every article is commissioned for its relevance to key exam topics. It not only provides topical material for your lessons, but can also be given as extra material for eager students.

It’s also an excellent read! You can preview the latest issue at http://zzed.uk/ThinkTank.

‘A well-written and succinct resource which deals with the key Political issues well and is in Pupil Speak – this would be useful to give to the pupils to aid their learning and revision’– D Taborda, HoD & Peer Reviewer

‘Extremely useful… thorough… accessible… I prefer Think Tank because it has a larger range of articles and is not so bogged down in theory’ – S Wood, Teacher & Customer

‘This should be the benchmark for how resources like this should be made and created – it is extremely impressive’– D Taborda, HoD & Peer Reviewer

Price is from £69 per year
Click here for full details and to order.